Never mind The Donald and Hillary and Bernie, etc. Over here we’re focused on finishing up the Primer work and starting the final paint!

As expected, laying on the primer paint exposed a number of little surface imperfections, so that’s led to quiet (non-posting) days of more filling and sanding. See the colored fairing compound ‘fixes’ above the primer paint layer: 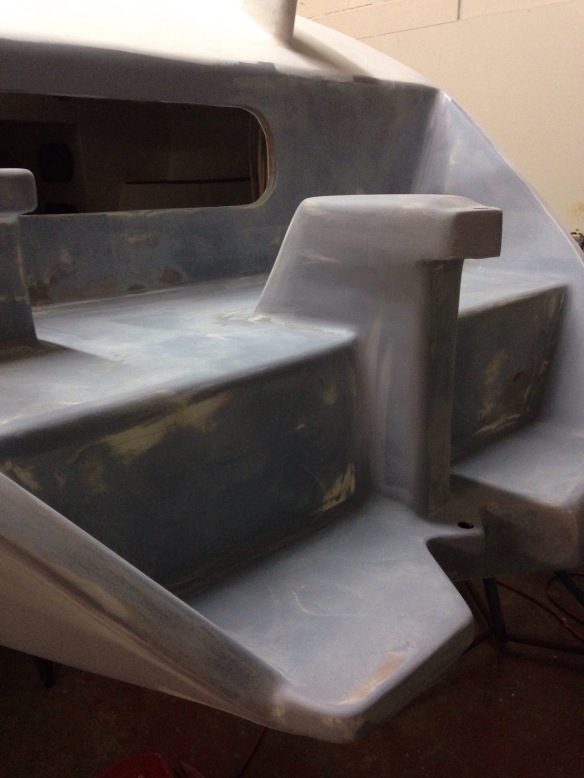 The good news for us is that’s the last of it, and the second coat of primer, where needed, goes on this evening. Then we’ll sand it all down to 220grit and begin final painting the deck with Interlux Perfection two-part LPU. Off white for the deck (same as the floats) and Platinum for the topsides (same as the mast and beams). I just ordered some West Systems roller covers, as everything sold locally disintegrates with the solvents in these paints, leaving roller residue in the surface. We can sand that away at the primer stage, but it would be a disaster in the final paint. If anyone has an actual roller cover brand name personally proven to withstand marine two part paints, please let me know!

There was no boat building last weekend because of the opportunity for a coveted crew position in the Doublehanded Farallons race. Skipper Andrew Scott had F27 #277 Papillon ready for battle, and we pulled off a 4th overall, 3rd multihull result. We were faster and corrected out over all under-30′ boats. It was a day to prove ‘waterline is king’ as the F31R had enough length and mass over the F27 to handle 25-30kts and really ugly square wave seas still sailing fast. The two F27s that finished the course were at their limits. Hats off to the F31 crew, and I have no problem with 2nd and 3rd going to a $2mil+ Gunboat and an expensive carbon-rig 40′ J120. Surfing 25 miles home on the ocean, getting overpowered downwind even with double reefed main and jib, meant a tired crew needing recuperation, not boat painting for a few days :)
Maybe next year we tackle the course with 39′ in the water…