If you’d like to follow along these adventures, come to this page regularly to get the boat’s  up to date position. If we’re out sailing, anyway.

Ravenswing puts out two types of location signals. [1] AIS-B over the radio waves, and [2] Iridium Go! satellite pings. When we’re underway, each system should be putting out a position report every hour or so. When we stop, and want to conserve battery power, we shut the units down and these sites will keep displaying our most recent reported position.

Method 1:  Ravenswing emits a commercial-style AIS signal via VHF that is usually picked up by a satellite network, then fed in to numerous world-wide databases. So you can use any of the ship-tracking websites to see where we are and what other boats/ships are nearby.  You simply enter the name S/V (sailing vessel) Ravenswing, and our MMSI # 368065160.

Family members of our crew – DO NOT FREAK OUT if this system does not show us. It’s all based on whether the satellites can pick up our signal which is intended to go ship to ship, not towards space. So it doesn’t always work, but we’re still fine. You’ll get a call from the Coast Guard if we’re actually in trouble.

Method 2:  We ping straight up to the heavens every hour to the iridium global satellite system, and the good people at PredictWind plot our track on this fabulous map:

Sometimes the Iridium tracking will show us on land… that’s because the satellite transponder doesn’t always live on the boat – it serves for land adventures too.

This is the best way to keep up with the boat. You can see where we’ve gone each hour simply by coming back to this page.  Enjoy!

So, they say you should never sail up against a deadline. Let the weather decide things. But here’s how it stacked up: we’ve been gone a long time and there’s a Monday morning plane ticket from La Paz to son Colin’s house in North Carolina for Thanksgiving. The boat (engine) is finally ready to go again but it’s Saturday morning in San Jose del Cabo, with La Paz about 130 miles dead upwind. We’ve singlehanded the Farallones race, and that’s about 75 miles in the daylight, and we’re feeling good about coastal night work too. If all goes well, we’re going to Press n’ Hold for three seconds on the Pelagic autopilot remote numerous times on this long beat to execute clean upwind tacks. The solo tacking dance is:  pre-tension the leeward running backstay, hit the Tacking button, ease the current jib sheet and quickly take up the other jib sheet, release the loaded backstay as the mainsail pressure eases, harden up the new backstay, trim the jib and adjust course a few degrees, if needed. The autopilot is set to tack the boat 100 degrees. Depending on the sea state and current, on some tacks we can do better (closer to the headwind), so after the boat is moving well on the new tack we pinch it up a little higher. Originally the machine was set to tack 90 degrees, but sometimes that wasn’t enough and we stalled out – that’s a total mess one wants to avoid. I probably tacked the boat 50 times in the 155 sailed miles on Saturday, and only blew it twice due to fatigue / not quite nailing the conditions.

You guys can play around with the visual settings on the tracker page (map mode vs satellite mode, etc): https://forecast.predictwind.com/tracking/display/Ravenswing?mapMode=useAtlas&windSymbol=OFF&weatherSource=ECMWF

The south-eastern portion of the Baja California coast is quite beautiful. Seeing these places in all day-parts, from sunrises, different daylight patterns, sunsets and night vistas, really changes perspectives on things. I’m enjoying the slower and more observational pace of looking at these landscapes, compared to passing by in cars and planes. The day started in the dark at 05:15, and with a decent breeze we were sailing just moments after the marina breakwater.

An hour later, looking back towards Cabo and ahead up the track 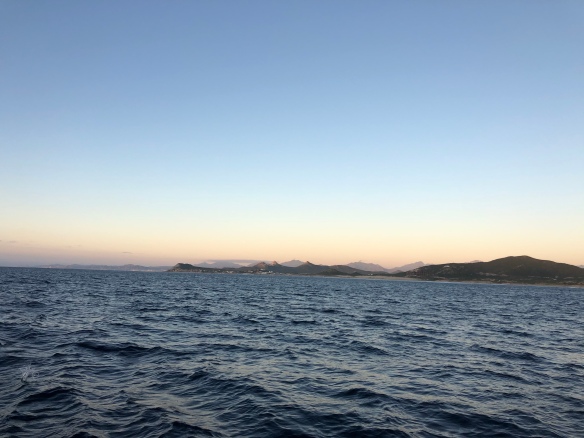 Here’s the portion of this sail that took place in the daylight (starting at the San Jose del Cabo point): 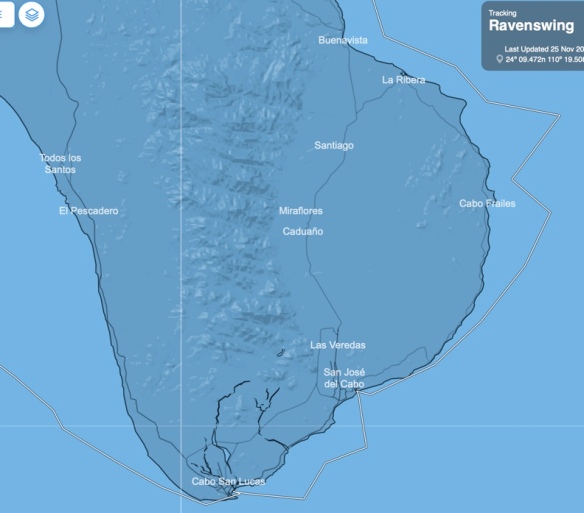 A few hours later the wind was up in the teens and generating wind waves similar to an afternoon ebb on San Pablo Bay. We could have stayed home and sailed 5 miles away from our house for these snotty conditions! If we bore off the wind a bit and let the boat speed get up above 10 knots, we’d pound through these waves every few seconds and throw a lot of spray. The bigger hits were sending sheets of water at the windshields, and of course some of that finds its way to the cockpit & driver.  So we tried to stay quite high to the wind, and made the best ground at about 8 knots of boat speed.  Here’s a mellower bit of this action:

Team Brizo, a reasonable first stop for this trip would be Los Frailes, which looked properly sheltered from the north wind.

12 hours in we had made it past Barilles (near Buena Vista on the map), which looks like a fantastic beach town. But windy, given the impressive fleet of kite surfers (some up on their foils!) that buzzed us as we came close to shore for a good look. 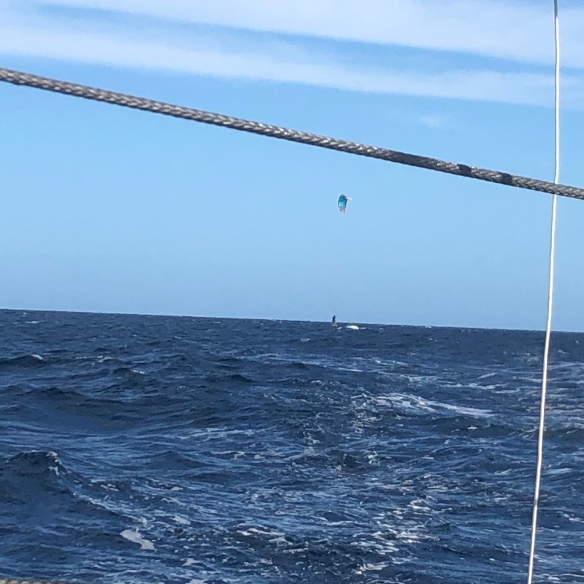 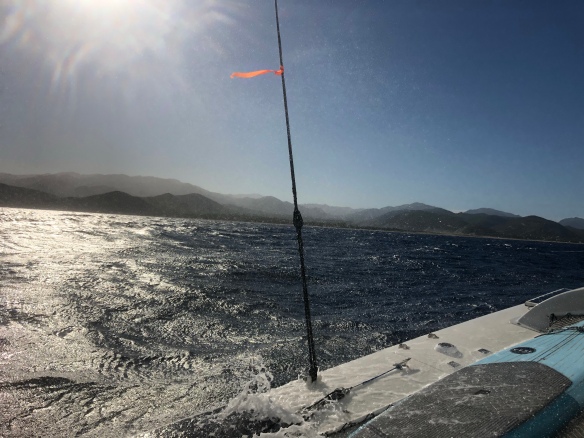 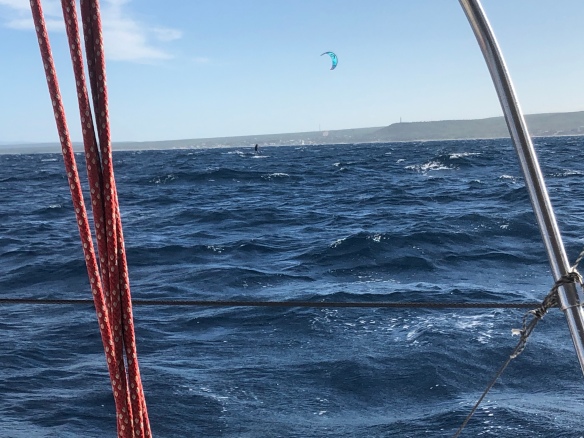 Nightfall began as we chased and caught up to HaHa boat Rover (only other boat we saw the whole day and night).

They headed in to Bahia de Los Muertos, a good anchorage. But I knew that if we stopped there, leaving 60+ miles for Sunday would make it tough to get to the early Monday plane. Ravenswing pressed on into the darkness, covering this ground:

This map looks easy, but that point to the right of La Ventana was not. The navigable gap of this Cerralvo Channel is a three mile wide funnel of wind and waves coming at northbound boats. The various lighthouses are difficult to interpret between the mainland and large island, plus a lot of shore lighting from development. We had a freighter coming at us who would not respond to radio hails and I wanted their acknowledgment to pass starboard to starboard, ie on the left, not the usual “stay to the right”. That was a tense hour short-tacking around this hairy point. Based on its AIS name I think the freighter was local and probably used to sailboats struggling through this pass. They gave us room to work. And another hour up that coast, development ends and everything got VERY dark (also no moon) for the middle-night. Definitely an “instrument approach” as the pilots say.

The spot at the top of that map, under the word SATELLITE, where the line touches the shore under the ‘nose’ of Punta Coyote, is where we stopped at 04:00 on Sunday, 23 hours and 155 traveled miles after departing San Jose. I got rolling again by 10:00 and finished the final 35 miles or so with a mellow downwind run into the La Paz channel. 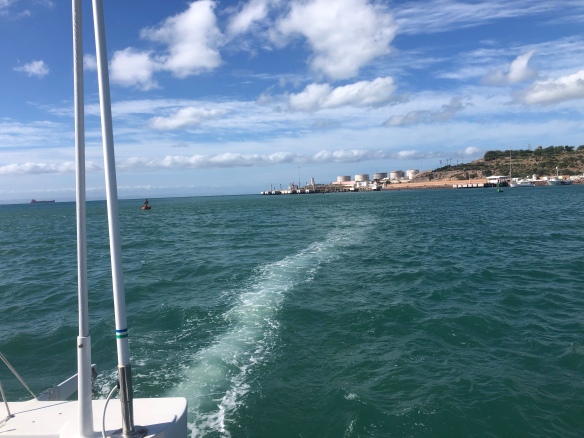 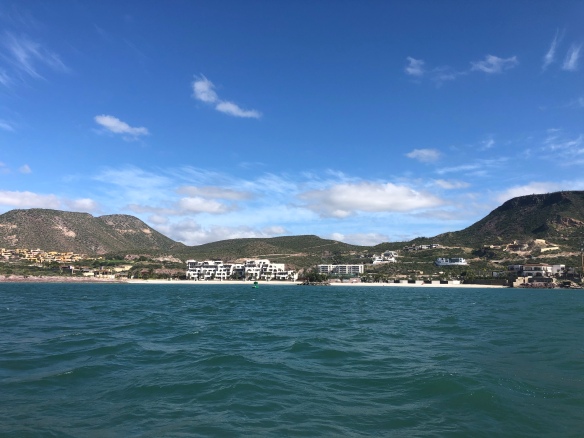 This trip was a tough beat upwind, and a quite satisfying 23 hour solo run Saturday. We did well, but then humble pie was served in La Paz… our target landing on the outer A dock at Marina Cortez was a mine field of anchor-outs, nasty current, and building tailwind. I radioed in and two guys stood at a ridiculously small side tie slip between large boats. They waved me in with no indication of 3-5foot depth! We grounded twice, had to quickly lift the boards (no steering in those moments), and could not execute a needed turn upwind. I could see this was impossible, and executed the only option which was a very long backing up against heavy wind weaving through swinging anchored boats. They were quizzing me on the radio, “where are you going?” ‘The hell away from your shitshow’ went through my mind. Ten minutes later the boat was secured on their deep water side tie, but still on the outside. This photo gives a partial sense of the boat-breaking risk up against docks in this channel 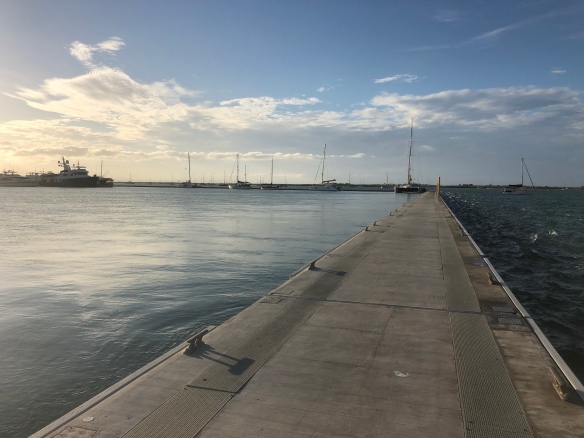 After a trip to the marina office we agreed to an inside tie here, and all was well.

And in a weird twist of fate… there are thousands of boats in La Paz. But the boat directly in front of Ravenswing landing here is the same one that towed us in to Cabo San Lucas a week before. And upon arriving in North Carolina Monday night, I got word those guys had pulled off the dock, been grabbed by the current sweeping under these docks, and crashed into RW’s starboard float bow. Thankfully I had been a margarita-drinking guest aboard their boat the night before. They are stand-up folks, and emailed me they had climbed aboard and immediately set in to repairing the cosmetic damage. 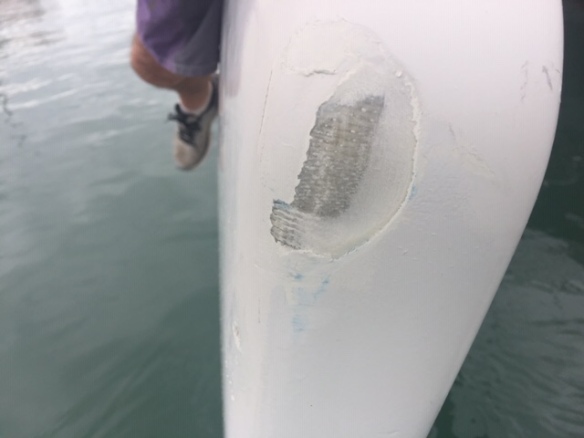 Geez, this whole trip of breaking stuff, being pushed physically, dealing with ocean weather, and incorrect/insufficient information was certainly not in the brochure. Ravenswing is not a rocket ship lightweight racing tri; but she is still a powered up Fboat, capable of getting quite wet, stressing important sailing gear, and causing trouble in a big breeze. This is performance / adventure cruising. I think the crew will tell you it’s all more demanding than we expected, and I know it’s good to be taking some time away from the boat to get recharged for some lovely Sea of Cortez exploring this winter.

Happy Thanksgiving everyone, and may you find joy in your families and push yourselves outdoors into your favorite adventures. Ravenswing asks you to keep exploring over the next horizon! We’ll be out there.