It’s actually hard to find a remote-sensing thermometer that will read warmer than your average bad day in Death Valley. This one from Home Depot tops out at 158 degrees, which works for our 160 target. The ‘oven’ has a removable section of Sheetrock to reach the power switch and read the old fashioned meat-cooking thermo inside to make sure we don’t get a runaway thermal event past 175 degrees or so. This combination does the trick. We also had to hard-wire some temporary plugs, conduit and switches because regular power strips couldn’t take the heat or current draw. Also needed to find a replacement air circulation fan after smashing Colin’s nice little unit with a little slip – oops. The fan is a must with a box this big – think of how convection ovens have hit the home improvement market.
Too many trips to the hardware store and wasted time on various improvements, but this post-curing system is now a-ok. Beam #2 was cured on Sunday, and the other two will fire early this week.

Meanwhile, the net lashing anchors are going on the main hull, similar to how it was done on the beams. Step 1 was temporary strapping of the PVC to the boat – it makes a nice clean line all along the gunwale … 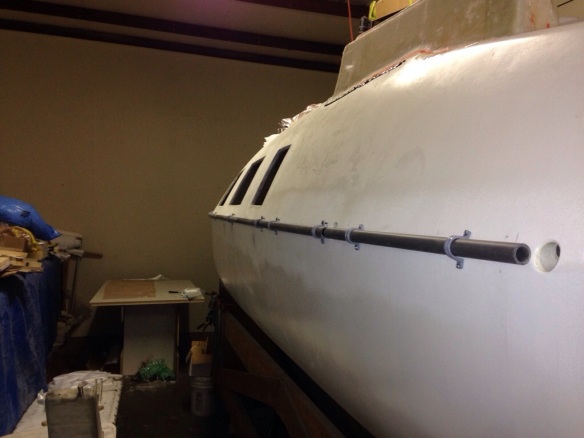 We’ll laminate the fiberglass in sections, skipping the spots where the pipe straps sit. Once the primary bagging is done, we can hand-patch the little spots left in between. The straps are held with tiny 1/2″ screws, in just enough to bite. Those little holes will get putty filled before we proceed to seal everything up.

Sunday afternoon was spent preparing the 186′ of six-inch wide 18oz fglass fabric needed to create these lashing anchors. That’s 31′ along the hull x three layers x port/starboard, plus all the vac bagging materials. After ten minutes of scissor-burning wrist work, it was a run back home to grab Jeanne’s fabric cutting board and rotary cutting wheel. That helped a bunch, and it was returned in time for tomorrow’s prom dress sewing.

Rudder fairing is good – first side finished today, and we attempt to get the exact match with side two starting tomorrow. Just keeping things fair, man!

5 thoughts on “Borrowed from the Missus”