Yikes, it’s been a month since you’ve seen any Ravenswing news. Dealing with the house damage and a 12 day Asia business trip meant the boat didn’t get a lot of love in January. Thankfully we’ve had some crisp clear days to enjoy on the water.

But above-average winter rainfall has THOROUGHLY tested cabin waterproofing, with a couple of minor fails. Should have used rubber washers under the heads of the window pane screws, and one of the windlass footswitches apparently didn’t get enough bedding compound, so a little trickle yielded a soaking vee-berth.

We had some EagleRail work in the bay area, and we hustled to finish up by Saturday afternoon so CEO Scott and his grown kids could get out on the boat in a rare sunshine moment. We sailed through the tail-end of the Three Bridge Fiasco fleet, and Scott found a new calling…

(yeah, I know, the revamped tiller and rudder cassette aren’t painted yet – too much humidity in the air all month!)   After months of the window-less windshield frame on the boat, we finally had the right VeryHighBond 3m tape roll and a clear afternoon. With the frame prepped and everything test-dry fitted, we applied the tape to the windowpanes first.

Press them in place, and push hard with a soft towel to force good adhesion. We left the protective film on the outside, and masked the frame, leaving a narrow slot for the Sika black adhesive rubberized seam caulk (same stuff we used to install the cabinside portlights) 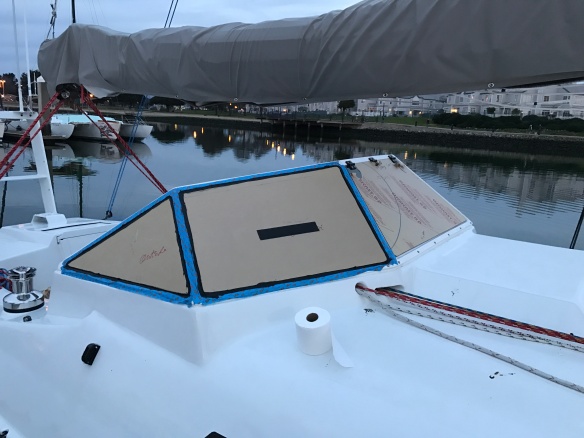 We let it sit like that for 20+ hours, and the next afternoon upon peeling away all the masking we were thrilled with the results. This whole windshield idea was inspired by a Halberg Rassey at the boat show 3 years ago, and it’s worked out great. The center panel is hinged to let a breeze in under the (coming) hardtop dodger.

Interior finish work continues. The lid for the fridge/freezer was made by planing some oak down to 1/8″ and veneering it to foam core and trimming with mahogany. Then some thick foam was added with a light glass layer for the section that “fills the hole” in the top of the compartment. 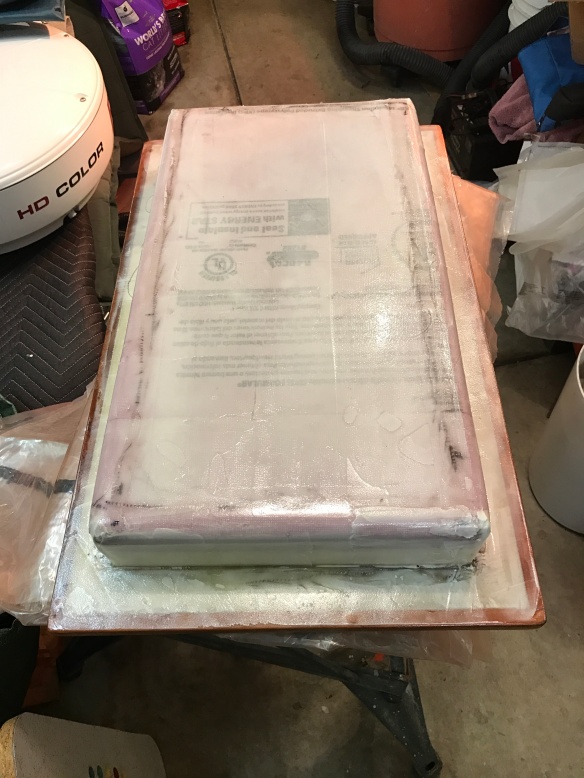 Still need to sand and paint the underside, glue a nifty handle on top, and configure some hold-down latching. With that, the fridge is ready to fire up, just awaiting the big battery bank install. (more on that in the next edition).

Those of you who’ve been aboard have seen all the exposed shelving in the various cabinets. Soon we’ll have those cupboard doors installed. Doing the finish work now, with four layers of Arm-R-Seal oil & urethane from Don’s mobile woodworking supply truck. 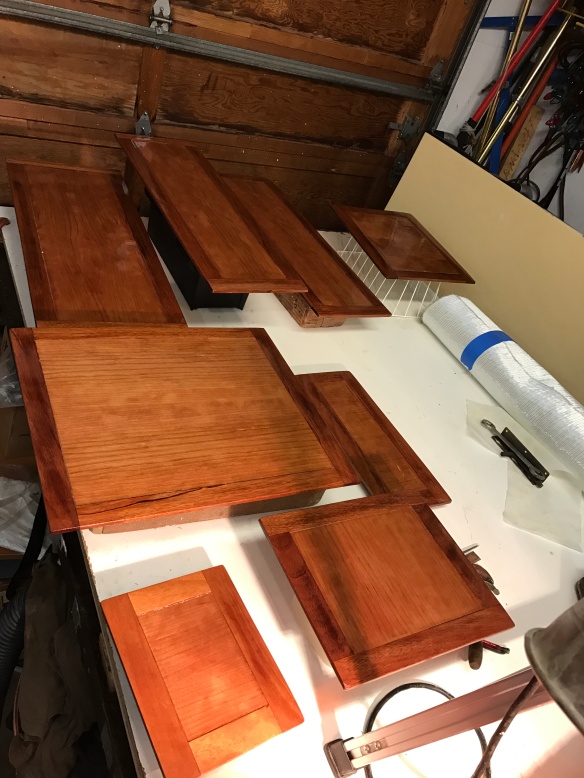 It’s been a while since we wrote a “don’t make the mistake we did” notes, so here goes. These doors are solid wood frames with foam core center panels and a very thin cherry veneer over the foam. We vacuum-bagged these all in one step, but the result was a little bit of movement and poor alignment of the edge of the cherry veneer up against the mahog. frames. Notice some messy join lines in this photo.

The learning is, the cherry veneer should have been laid down and bonded to the full sheet of foam core as a finished unit, and then that large single piece should have been cut to make exact-size panels for the solid wood frames. The epoxy finish would have been applied to the frame surface and the veneer surface after they had been joined and glued together. It all would have turned out much cleaner. The do-it-all-at-once method gave some lumpy finishes in the veneer, a bunch of extra sanding, and now the need to add some surface trim to hide these gaps. Darn.

Can’t remember if I’ve reported this already to Drew and Keith, so just in case, tacking the full jib down much lower to the deck has solved the diamond-wire interference at the top of the sail. In the light winter winds, it’s coming through the tacks just fine and flying free up there.

Jeanne and I are living out of a rental cottage 15 mins from the house, and our garage is still the boat-build shop. But repairs from the Dec 15 tree fall have not begun. Insurance work removed the big tree and we had the guys leave the bottom 25′, with the hopes of getting these huge logs slab-milled (really hoping for some beautiful dining tables out of this disaster). The ground-to-14′ section weighs over 9,000lbs, and this Mack truck couldn’t get it last Sunday: 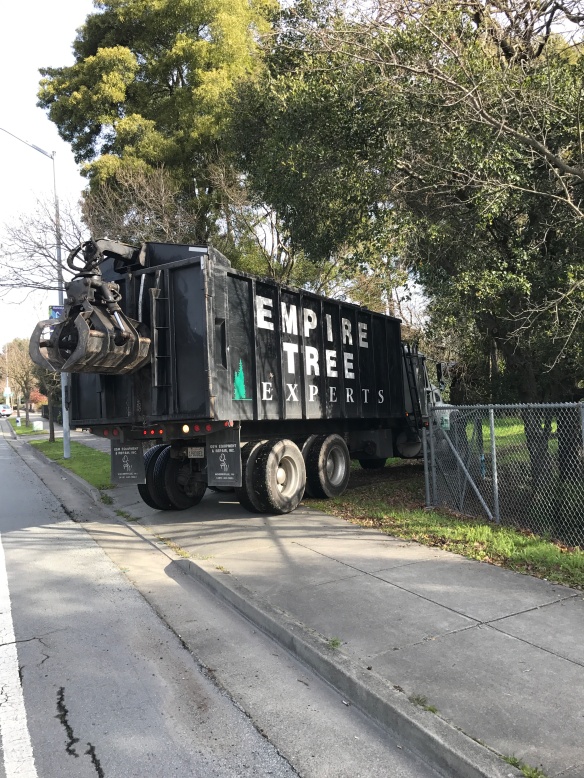 The Empire Tree driver suggested Steve Turner who owns a regular logging truck, and I realized he’s the same guy that hauled Ravenswing’s main hull from Fremont to Santa Rosa five years ago. So he rolled it at 5:30 Monday evening to do this: 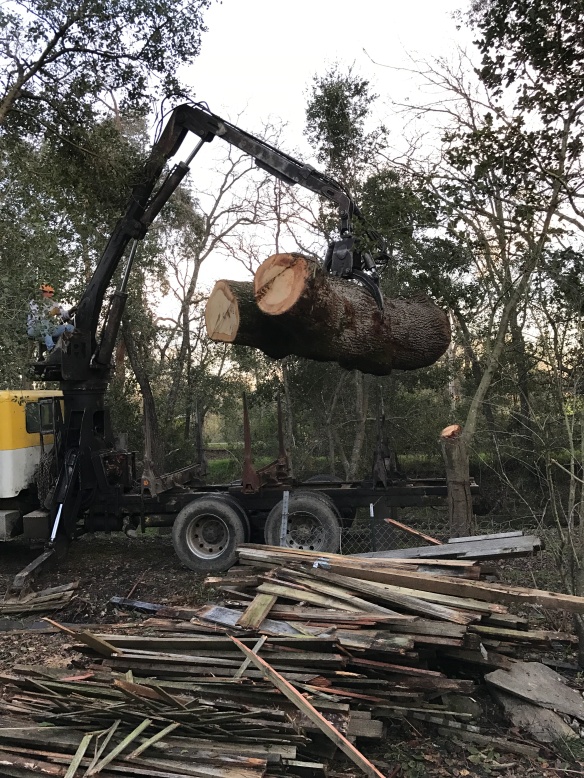 We unloaded them in the pitch dark way out in Occidental where new-friend Matthew is setting up a chain-saw slabber, and we’ll go out for a cutting party soon. Then the wood sits for a year or so before we consider table-making. At least the back yard is clear for demolition and construction now (except the huge stump 1/2 in the ground).

About that 12 day work trip; it started on a sober note. On the way to SFO, I stopped at the boat to prep it for absence. Walking out E-dock, I was shocked to see the big orange QingdaoChina BACK IN RICHMOND. We all just assumed the rescue crew had sailed her back home to China, but now of course it makes sense they made the incredibly sad 700 mile trip back here.

She sits at our docks looking forlorn, with the nasty winter weather beating down. And all I can think of is how this should be Guo Chuan’s time to celebrate his accomplishment.

The business trip was first to Hong Kong, and I had some free hours to look up the Royal Hong Kong Yacht Club. Got to chat up the events manager about bringing Ravenswing over for their China Sea race to Subic Bay, Philippines at some point. It was fun poking around the very dense urban club. With weather similar to ours, they too sail year-round.

The middle of the trip was the port of Rizhao, on the Yellow Sea sort of between Beijing and Shanghai. And to get there, we fly to Qingdao, in Shandong province, China. So after finding the QingdaoChina boat at my home dock, five days later we were standing in THEIR home port, the site of Olympic sailing in 2008. Eerie. 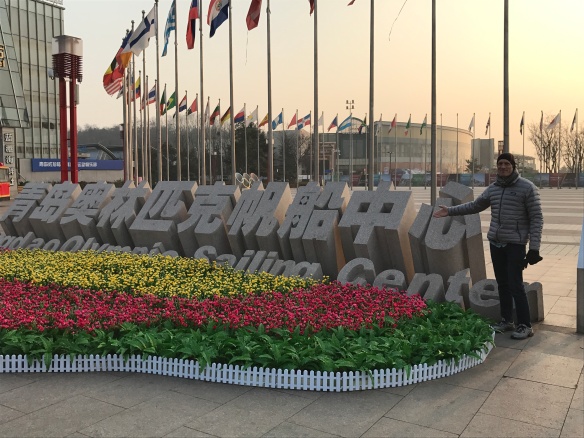 A female windsurfer won China’s first-ever Olympic sailing medal, obviously a source of great pride. Inside the museum I was telling the story of Guo to my colleague Frederick, and we came across this commemoration of his earlier achievements.

In typical “go big” China fashion, the whole center was huge and over-built, meaning that the venues have many empty storefronts and just not enough business to justify all the infrastructure. But it does look like there’s a thriving scene of day-sail charters, thanks to these simple-but-effective under-rigged catamarans. Go multihulls!!! 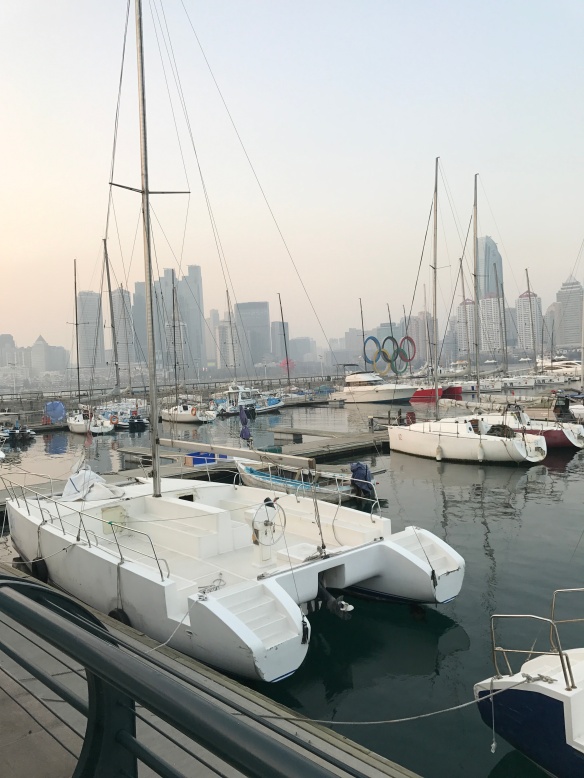 In the morning we drove 2.5 hours down the coast to the working port of Rizhao, but our hotel was a few kilometers north, in the recreational boating center. Although Sunday morn was -2 degrees C, we took a brisk walk to look at the all-wood fishing fleet. Quite a juxtaposition of these working vessels anchored so close to million dollar yachts.

I spent the last two years of my marketing career flying United Airlines 2-3x / month, trying to but never getting a ride on a new all-carbon fiber Boeing 787. What a surprise to get off the tarmac shuttle at Qingdao for the flight to Singapore, with the chance to walk around and lay-hands (quickly!) on this 787 Dreamliner:

Apologies to EagleRail Mike for putting up with some airplane geeking-out. Certainly wouldn’t have gotten to walk around the new plane in the USA :)   But if you haven’t seen footage of Boeing building these things with huge carbon fiber spiral spinners, search it on youtube and see if it reminds you of making giant spider webs. Light and strong = fast.

Seeing the results up close of China’s urbanization program, the immense scope of building housing and transport to bring millions of people in to the new middle class, is stunning. Every airplane fly-over, bus ride or train through these cities is amazing. The smog and pollution is rampant, and all one can do is wish to be back home, out on the bay or ocean benefitting from that big Pacific breeze. Let’s figure it out planet-wide, please!

2 thoughts on “Dodging the rain”