The game plan for Ravenswing’s dinghy is the folding 10’ Portabote and 4hp motor we found “barely used” on Craigslist a few years back for $700. The plastic hull folds flat and secures nicely on the nets. But the original heavy plywood seats and transom were a big bummer. A wise man would have coughed up the $1700 at the boat show for a new one, but no, we thought “we can just quickly redo those in foam core!”  Well over a year later that little project finally concluded. Still need to install the replaced motor choke parts scavenged at Bill’s Outboards in Sausalito last year, then we’ll go find out if Jimbo’s little nemesis boat seems any more realistic as the voyagers’ launch.

If you’ve crewed with us, you know my pain about the one piece of gear placement that had unintended consequences. The main sheet base blocks  in certain situations bang directly on the hull.

Here we prepped the area to mold some Kevlar protection pads. 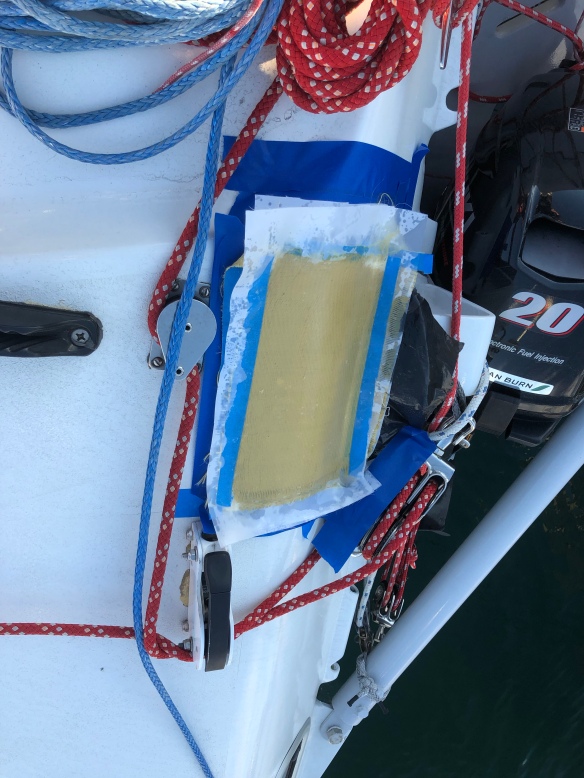 They’ll get some paint and then get sticky-taped in place.

Carlos and I motored over to the sewer pump out dock for the maiden attempt at that task. Of course the big pump was broken. Tried again the next week and up came the unmentionable flow, although just for a moment. After checking all the pipes I could not figure out the lack of suction, and decided to blame the marina for not really fixing the pump. A few days later the head compartment smelled a little ripe so I removed the inspection port cover above the tank area and grabbed a flashlight to peer down into the holding tank. OOPS, the nifty-idea sight glass that we bonded on the inside before permanently joining the tank sections had, of course, been yanked off its mooring the moment the pump got achieved enough vacuum, and will now live in the bowels (I’m not sticking my hand in there!!!). Luckily there was just enough clearance between the tank top and under the toilet shelf to slide a new piece of clear plastic and the right permanent tape to seal this back up. Yuck.

We expected to show you new starboard side portlights by now, but the Bay Area FINALLY got some real rain so our al -fresco boat is taped up until the sky dries and sun warms enough for painting to resume.

The word from MA is optimistic about our mast getting in to production finally. Haven’t seen photos of carbon on the mandrill yet, but we’ve been assured that’s imminent.  Meanwhile, to stay somewhat sane, we’re taking some rides on OPB.  Rafi upgraded from the Corsair 750 to a really nice F31 OneDesign, ex-“F-bomb” out of San Diego, now LookinGoodII and it’s fast as hell. That’ll get the other bay 31s to take notice. We had a very windy Sunday afternoon South Bay blast, and the mutinous crew demanded the new skipper figure out how to reef the large main :).

And a big thank you to skipper Bill of Dragonfly 1200 Emma for taking me as his crew in Saturday’s double handed Corinthian Race. I didn’t bother bringing the Sailing Instructions because the boat sports her own printer! I was expecting a gentleman’s leisure race, with the fine leather couches and all. Well, we had some issues with the electric winches and the scrawny crew’s muscles. Let’s just say that 65’ mast and big sails are a darn good work out. The appreciative skipper provided a nice dinner and snazzy new crew shirt, so all was well. Emma is a beautiful craft and we encourage all local tri fans to get out there with Bill when you can.

For followers of Farrier Marine’s Philippine progress, the F33 Carbon made it to SF and Gary Helms brought it to the Bay Area Multihull Assoc annual meeting. It’s for sale (295k) and absolutely amazing looking. 33’ of ocean ready rocket ship. Strap in and blast away!  Go talk to Gary!