… seeing first timers enjoying a good sail, that is. Say hi to Jen and Tim, business colleagues from Chicago. Jen hadn’t driven a boat before, but something told me she’d be a natural at the tiller.

Her husband got a bit of film for us https://youtu.be/x6LKdtwzrIc

Early November was remarkable weather. Afternoons in the low 70’s with warm gentle breezes. Perfect weather for easing Ravenswing in to the groove with the new rig.

Jeanne, Leslie, Ron and I had an enjoyable Friday. The ladies want more boat speed. We found plenty in the Slot, but it was chilly so we headed back to the north bay.

Then there was a fantastic Sunday outing with Bay Area Multihull legends RickWS, Carlos, Chris, Truls and Rafi. Six skippers , each knowing what’s best… we found ourselves laughing after Carlos had to quip, “I know how to drive the damn boat, guys”. Yes, he does. 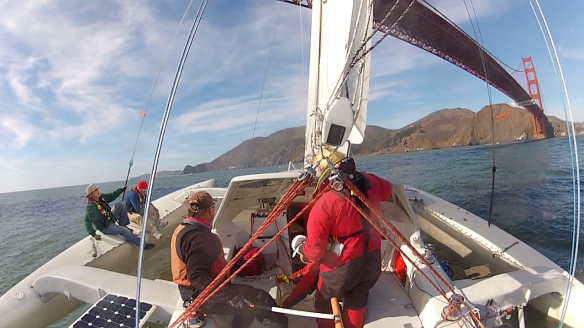 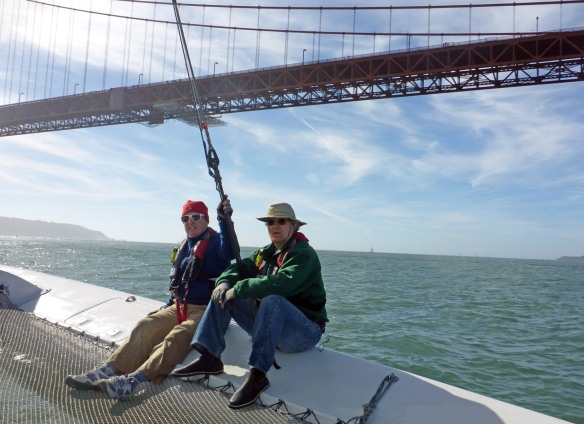 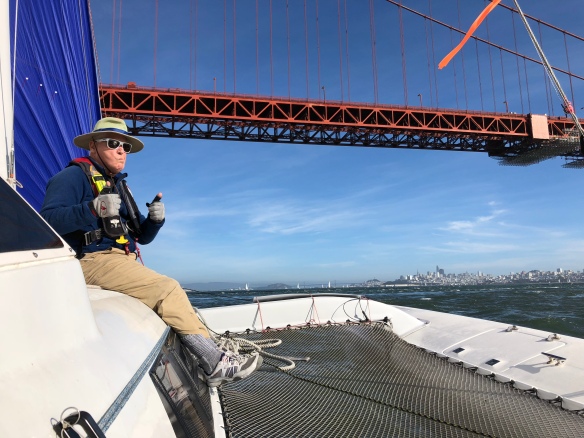 This was only the second time we’ve had the Reacher up (big blue sail), and big thanks to ChrisH for slacking the halyard way off to curl the luff once we turned downwind. This thing makes a great chicken-chute that way! Here you go, framed up with The Rock (Alcatraz prison)

I didn’t drive that day, instead I roamed around the boat looking at new-to-me vantages. The best was the aft cabin – Rick is right, that’s going to be a nice spot on passages. 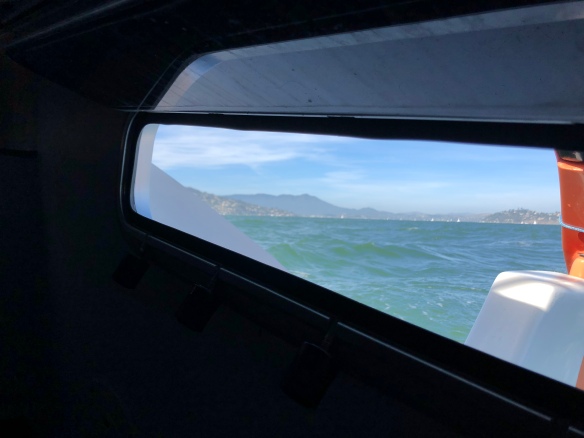 So while we’ve really enjoyed some sailing, fit-out work continues. We found SailTimer.com, a solar powered, wireless wind sensor that functions independently of mast rotation. The idea sounds too good to be true! We installed it before the mast stepping, but it wasn’t spinning freely. We think it got bumped the morning of the mast stepping and I didn’t notice it was tweaked. Carlos volunteered to go get it. Now that’s a dedicated sailor :) 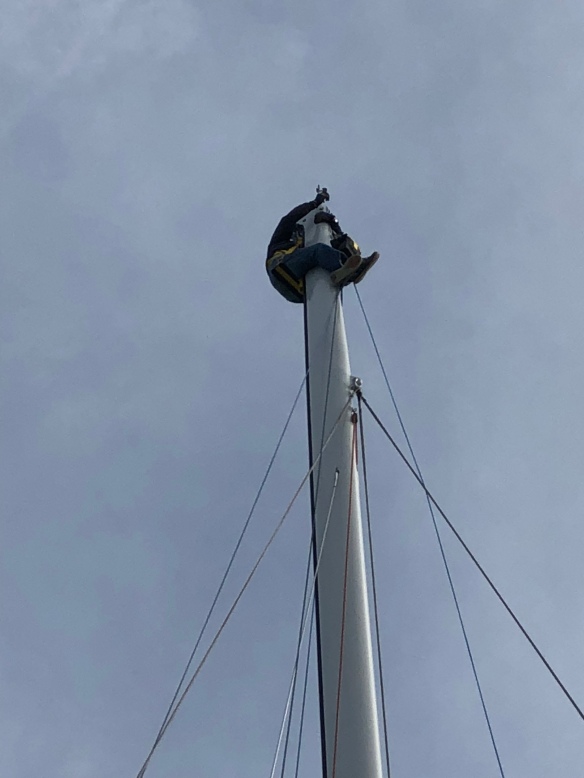 The installation instructions did not warn about Bluetooth being dependent on line of sight. I put the unit in the middle of the masthead for strength, etc, but the crane on the aft portion, including a big steel sheave pin, is blocking our signal down in the cockpit area. Argh. So the SailTimer folks just sent us an offset arm so we’ll move the unit in to clear air about a foot aft of the main sail track. More on this topic later.

I didn’t have the heart to tell you guys earlier, but the first time we sailed the new mast, the rotation control arm ripped out of its too-slight mounting setup. We’ve tried to control rotation with various straps; it’s worked somewhat, but also put some nasty rope burns into the nice paint job. Dang. Keith and I have discussed it and decided an interim fix is to drill much deeper in to the mast foot internal G10 web, and this time epoxy the bolts in place.

I made a slurry of epoxy thickened with bonding fibers, and syringed it in there.

Keith, I kept the black plastic spacers because of how the metal shape fits the mast. Plus I think they help with shock absorption. But I did go another 1/2″ deeper than we talked about.  We’ve sailed it once in light winds, and it worked fine. Time will tell. 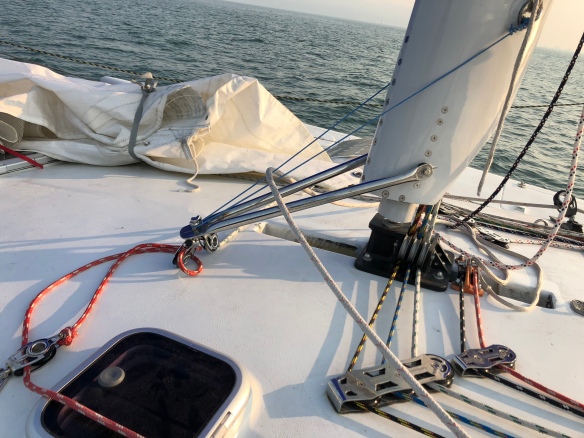 Before putting away the sewing machine, we modified an old sail bag to make a stay-on-deck bag for the rolled up reacher. Got this clever idea from Round Midnight!  Once the roller-furled sail is dropped back down on deck, it gets folded in to this bag and stored right there ready to go again.

We also added this 3′ long leader to the reacher control sheets – this helps pull the sail around the forestay during tacks or jibes. I’ve known about this for spinnakers, but just realized we needed it for this sail too. 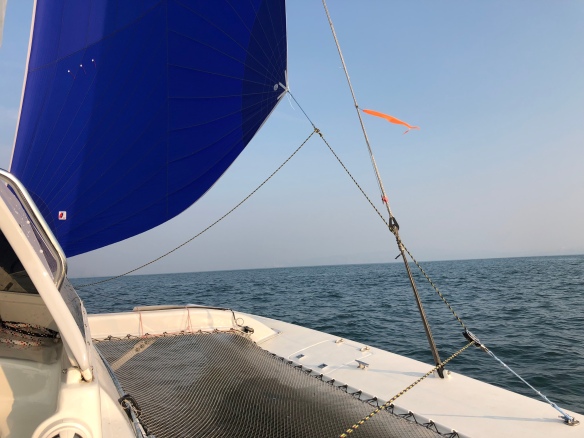 This one is for John Franta at Colligo, and Keith at Skateaway Design, for showing how well our bowsprit hardware came together and makes this sail easy to manage. 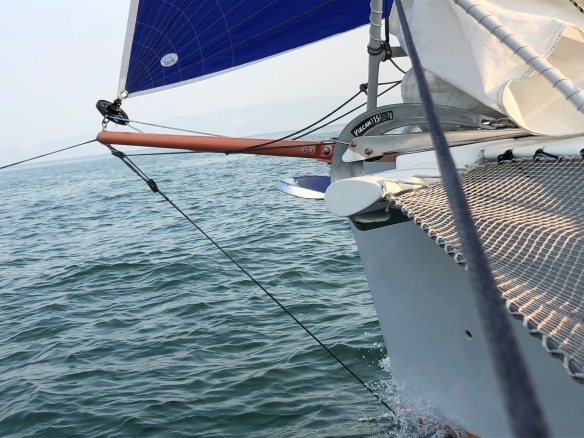 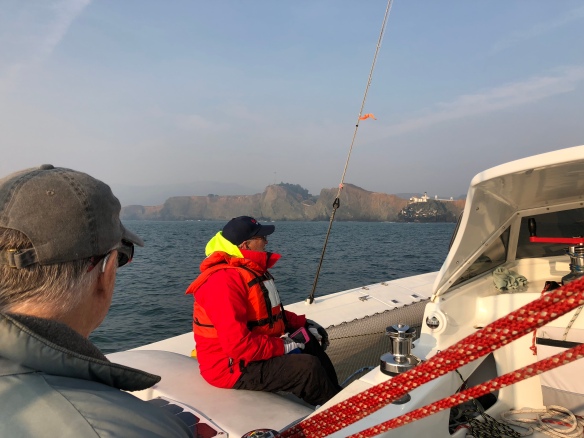 Charlie and RickH took the boat out the Gate to the LightShip buoy, a few days in to the Paradise fire smoke invasion. Quite eerie to be sailing on SF Bay wearing particulate masks, and upon getting  about five miles out, we could not see ANY of the coast. This fire has been awful to so many thousands of people, and it put a hideous smoke layer across a large part of the state. From our front yard – normally we’re looking at Mt. Tamalpais in southern Marin here. We bugged out, heading for Griffin’s place in Colorado. 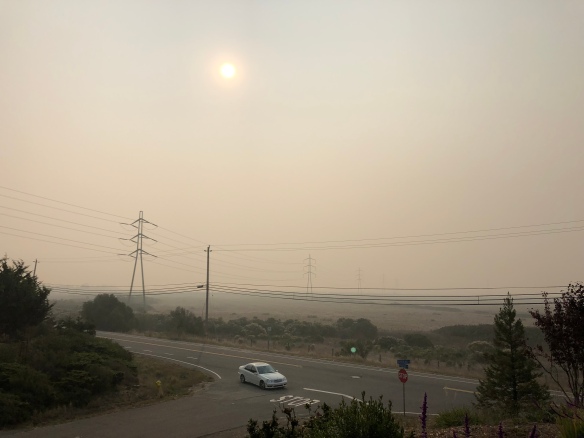 A curiosity stop at the Bonneville Salt Flats along I-80. No race cars, as the BLM shuts it down during winter due to slushy salt, and recreates the 10 mile race track each spring.

Traveling in one’s “land yacht” can be dangerous. This photo is just a few minutes after a rather harrowing fish-tailing incident eastbound on I-80 just over the continental divide, an hour before Laramie, WY. Ice on the freeway and 40kt wind gusts busted the trailer loose from the road. Huge thanks to Chrysler’s traction control and Jeanne’s purchase of a fancy Blue Ox anti-sway hitch system. That gear kicked in and we managed to NOT leave the road or have the two 50mph semis hit us as we swerved and corrected out. The whipping action deployed the entry steps, and threw groceries, dog food, etc. all around inside the trailer. It took a few hours to calm down from that one. Don’t drive these things on ice, people!!!  And if you do, don’t be the idiot who didn’t have the truck in 4wd and thought he could drive the same speed as the big rigs. NOT.

Finally tonight, a little preview about an exciting package arrival. 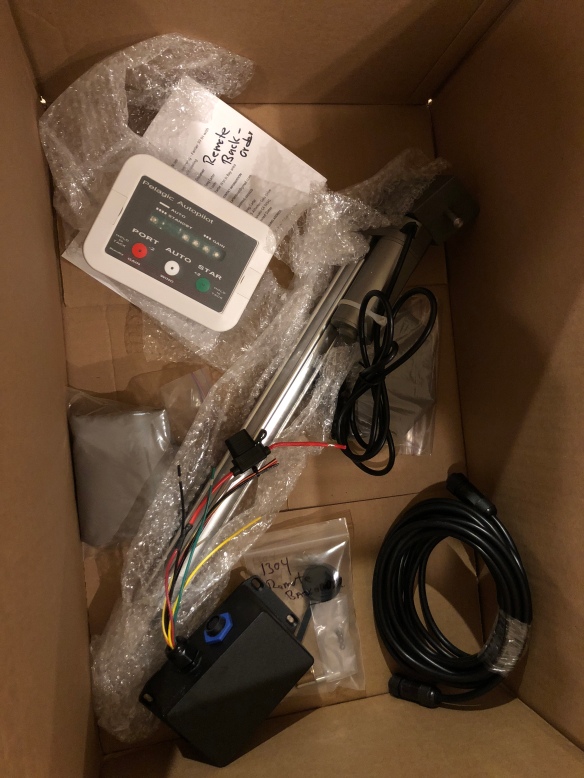 That’s our Pelagic Autopilot. Designed and sold here in the Bay Area by a small company owned by offshore sailors. They do one thing – make robust, simple sailboat steering helpers. We have significant fabrication work ahead in December to make the necessary mounts, so this may take a while. We were tipped off to this by a sistership, as this autopilot worked great for John and Melanie as they sailed their F36 across the to the South Pacific in April.

Happy Thanksgiving to your families. A lot to be thankful for. Peace.

1 thought on “It never gets old”