While the actual crossbeams are complex, 100+ pound structures, they make up only 10 inches (looking down on them) across what will be finished 2 ft wide beams. The rest of the width comes a 5 pound ‘fairing’ made of foam core with one layer of glass inside and out. I showed them being built in their frames early this year. Here’s one of them with the access holes cut – that’s how we reach inside to glass them to the solid structure. Now that they’re installed, those holes will get filled back in this weekend.

The silver and white panel in the background is the final panel of the refrigerator cabinet, the side where the cold plate mounts. 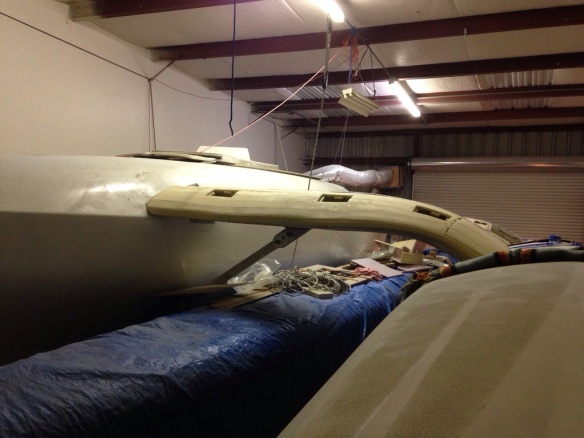 After the fairings go on, the completed beams get flanges formed. This is where bolts will go to hold the beam to the float. In the photo you might be able to see the plastic non-stick that’s on the float deck. The Fiberglas flanges are formed in place, adhered to the beam but will pop right off the deck when we lower the float back to the floor.

Today’s steps were the final primary construction of the four beams. That build spanned almost two years, so it’s a very satisfying milestone. There are plenty of hours left to skin and fair them, and add the net lashing points, but it’s a huge relief knowing the ‘danger parts’ work is done and the whole boat fits together as intended :)