A month or so back we had the great fortune of meeting Chinese pro sailor Guo Chuan as he scrambled to prepare the massive ocean race tri QingdaoChina for a solo record attempt SF to China. The big orange boat was guest docked at our marina, so Vanessa, Joe and I got to step aboard and look about. Guo and crew needed some the next day with sail handling help, so Drew and his son were able to spend part of the day getting to know this brave, bold and humble man and the amazing boat he pilots. 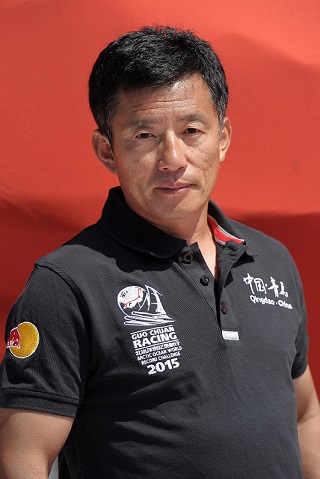 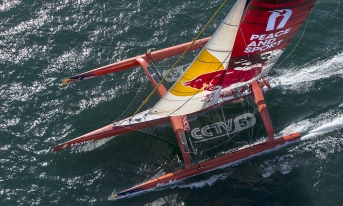 The weather window opened, he left the Golden Gate with a head of steam, passed Hawaii on a better pace than the fully crewed Volvo 70 Maserati, and then went silent. You can read the full story online, but it seems there was trouble with a huge headsail and he was thrown from the boat. They found the severed end of his lifejacket tether attached to the boat. A tragic death and our hearts ache for his lovely wife we met briefly on the dock. Guo was the same age as me, and dies a hero and inspiration for achieving his dreams.

Or, you live your life to its full chronological measure. This is Jeanne’s pop, Dan, during his brief tenure in his new home (moved in to our house) this month: 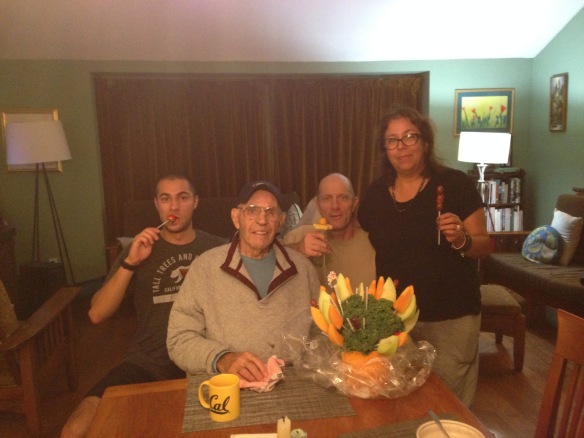 Dan is the most stoic and strong-willed man in my life. As his eyesight diminished, he reluctantly moved from his San Jose house of 40+ years to a retirement center apartment near us. He kept up the morning hour long walks, with a white tip cane, to the amazement of the staff. We brought him over the boat shop a few times, and the scope of that ‘big whale in the room’ entertained him. We regret he wasn’t quite well enough for a boat ride after the launch, and now it will be left undone. 89 years of Bay Area living, military tours in the Pacific and Europe, 36 years at PG&E, one of 8 siblings in a strong family of Spanish immigrants (three OLDER siblings live on!), husband to Mary for 50+ years, and most thankfully father to two amazing kids. Dan died here at home last Sunday, and our hearts are broken. A tribute to his stubbornness – Jeanne, Leslie, Griffin and I took Ravenswing out Wednesday afternoon for a head-clearing short sail. Bah-humbug, as we cleared the breakwater the wind shut down and we drifted around in the sunshine. At least the boat proved to move very well in the tiniest of breeze – that was a nice first proof point. Had to laugh; it wasn’t time yet in Dan’s eyes for an enjoyable sail. But it was just right anyway. We miss you Pop!!!

Bottom line, these gentlemen remind me we should all live the lives we aspire to. Let’s not waste our moments together, nor squander our intriguing solo pursuits. There are infinite “ways to go”, but let’s depart at peace with what we’ve accomplished or experienced.

Doing hospice nursing work at home was challenging. For mental relief during those two weeks I would step out to the attached garage (often with the baby-monitor to Dan’s room) and tackle making the sail covers. The main’s is 17′ long, and we quickly learned why sail and canvas makers have huge clean floors or massive worktables. The project became a dance of rolling trailing edges of patterns and fabric. We bought the instruction book from Sailrite, and it proved a very good step-by-step. We were quoted about a thousand bucks for the main cover and a 12′ deck-bag for the jib. Spent about $200 instead on the book, fabric, thread and fasteners. We won’t write out the details here, just some photos. But email or comment if you have questions. 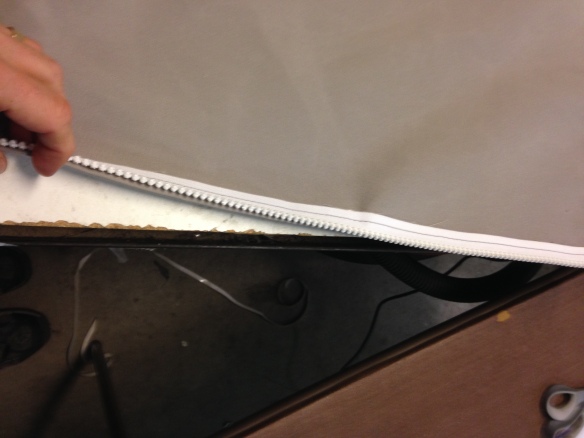 The mainsail cover fit as-advertised. Although Keith with appreciate that this still-new Hydranet sail is so stiff that it’s rather unforgiving for being folded down tight under the cover. Time should make that easier. 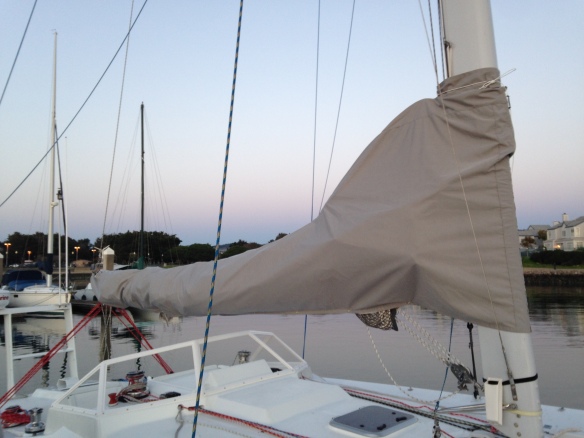 (yea, we still haven’t bonded the dodger windows in… too much else going on!)

The jib bag is a trial-and-error job. It proved difficult as a beginner to measure the unwieldy lump gathered at the forestay, and of course it was raining when Charlie and I did the trial fit. 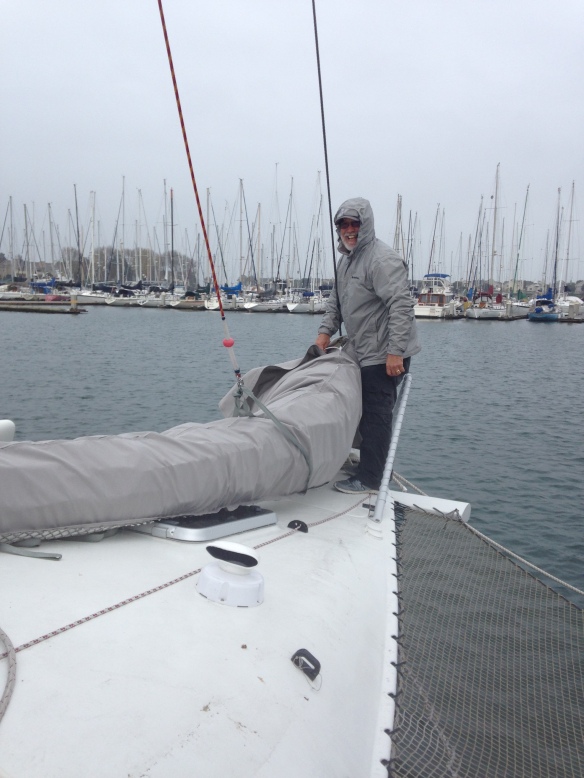 Got the overall length right, but the girth around the first yard is tricky. Let’s just say there will be another extension panel added this weekend. Notice the netting along the bottom. We closed the underside 10″ width of the bag with leftovers from the main nets; the idea is to let the sail breathe while in the bag. Also, we’ll use the halyard to keep it up off the deck.

With the sewing machine set up, we’re hitting the odds and ends too. Thanks to RickWS for this idea – the boom and main are so much bigger on these boats, and we can’t get arms around them. So your sail ties need weight on the end to throw them over and catch underneath. Sewed some rings on, just like what I saw on Rick’s Round Midnight. Works great!

OK, I said there wasn’t wind to test the new rudder angle, but we did experience how light and responsive the direct-tiller approach is. At first it was startling how easily the rudder turns, but I think it’s all in keeping with the “it sails like a big dinghy” sport-boat thing. The tiller ended up at 8′ long, and although the sweep for tight turns goes across the whole aft cabin, it’s quite manageable and feels just like the aggressive tiller throw needed to tack the F27. Here’s the finish of the Frankenstein ‘grafting’ of old to new: 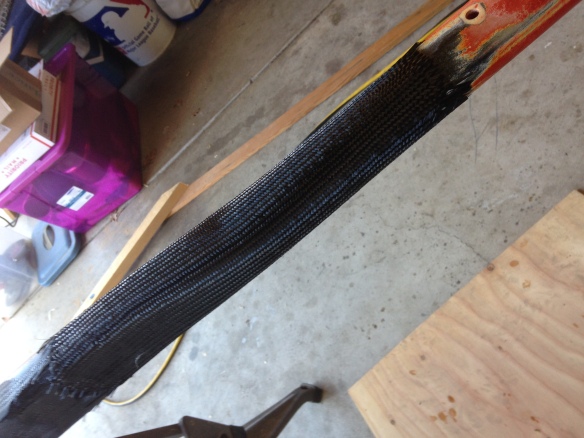 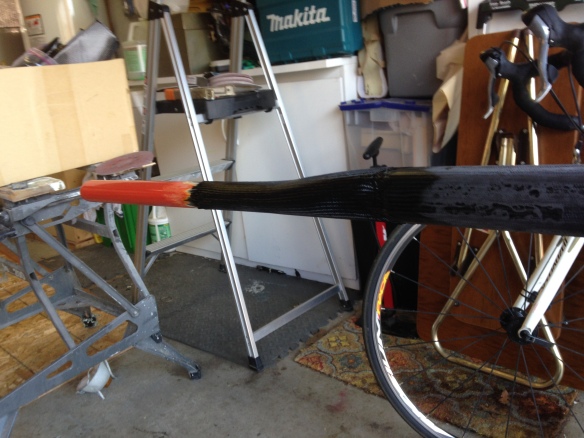 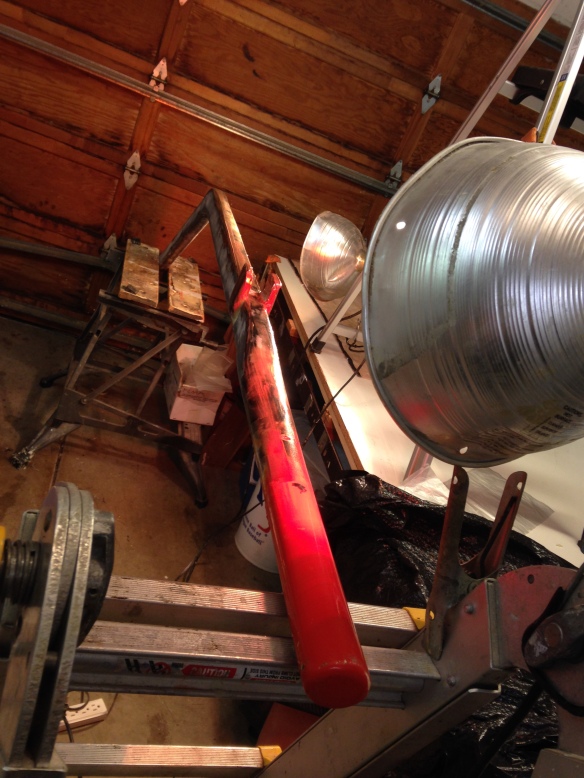 The tabs sticking up are a catchment for the Forespar steering extension handle that Jim gifted to the boat. It swings around and stows very securely back here. The tiller shape and length turned out just right, but it had a bit too much vertical flex. So today it’s getting a bit of reinforcement, especially where it makes the turn down from the cassette angle.

Next up you’ll be reading about electricity storage. We’ve chosen the source for the Lithium Iron Phosphate cells, tested a cardboard shape mockup to make sure the 16 cells will fit as intended, and we’re reaching for the credit card…  stay tuned.

7 thoughts on “Different paths to death”