Well, no backing out now.

Went in here and ‘gave notice’ to vacate our slip of three years. Gotta leave by Sept 20 or start paying again :)

Next we went here and signed up:

But before the Baja HaHa we’re pumped up for the Multi Marine Summer Splash on Sept13-15 out to Catalina and back. These are great deadlines for finishing all the little stuff.

When Jim mentioned his electric charging needs I realized all my battery sizing calcs never really factored in other crew power needs. Anton recently reconfigured our LiFePO4 charging program, so the solar panels sit idle quite a bit. The solar charge controller has a direct-to-load circuit available, so we installed USB and cig-plug charging ports fed directly by the panels. So Jimbo can charge up by day and use separate battery juice by night. Alls well.

Galley trim-out continues. Ravenswing is one of likely few boats with a dyneema veggie net. Just a bit of overkill!

This is what we should have had when the emergency hatch opened and flooded the aft cabin. A free standing high power pump, easily deployed. Got this rigged up today.

Thought a field test was in order so we filled a bucket and set it all in the float hull. 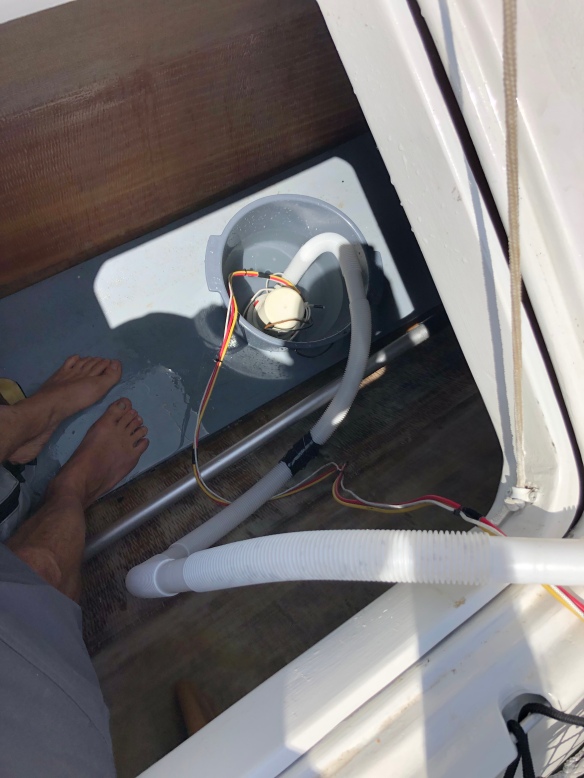 Yea, the boat builder didn’t think about how that big 2,000 gph in a little bucket would behave. Of course it flipped it over and pulled the hose back inside. So while the pump works great, operator error resulted in emptying the gear and drying out for the afternoon. Never a dull moment on Ravenswing.

Golden Oldies Multihulls (Stephen) called at 6pm yesterday, asking where I was because he had three spinnakers in his car. Dropped the wiring tools and hit I-80. Two hours later in Roseville we had this load. 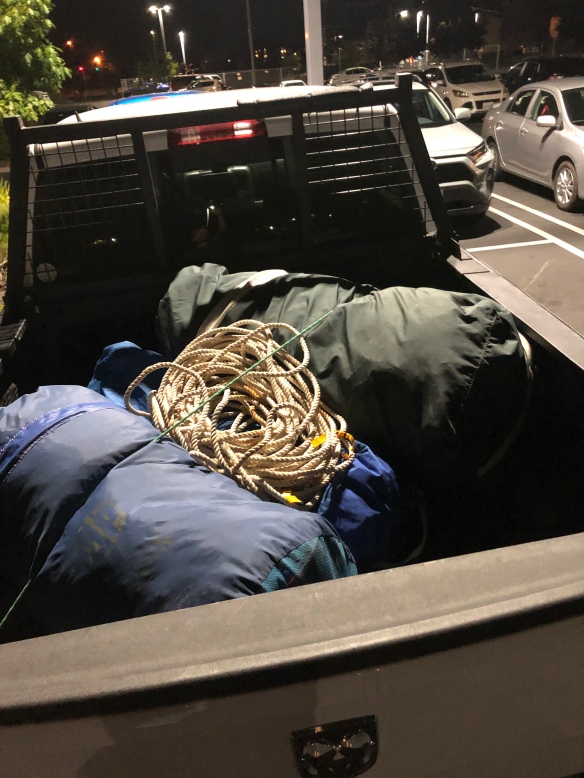 Home by 11:30pm and my dear co-owner was a peach about running the tapes with a 100′ measure at 8am today. There’s a .75 ounce asym that might be a little too tall. And a nice 1.5oz from a Reynolds 33 cat that’s a bit short but maybe good. On the third sail my tape measure passed 60′ from the clew towards the head when we hit this

what the heck? And what is the “.com” logo? Keep unpacking it and OMG, Stephen has a KiteShip kite sail basically brand new sitting in his garage for years. These things fly from very long sheets above the mast. They made a run at America’s Cup and Sydney/Hobart, etc. But the company is gone now. I’m not going to tackle this beast for Ravenswing, but want to try this out on a large ocean boat. Anybody in? Go search on kiteship and you’ll see what it’s all about. Meanwhile I’ll get ChrisH to help test the two spins on Friday and hopefully one fits!

One of the profile questions on the BajaHaHa entry form is “what is your dream boat?” I told them to go look at their own article from Aug’15. We’re finally getting there.

3 thoughts on “Commitments made”