Researching which resin to use in the beam build led to lots of choices, a big range in pricing, and many opinions. At about 10 gallons in, and 3 of the beam-cores out of the mold, I’m really happy with the DR-5 “toughened” epoxy (and the corresponding EH-102) from Applied Poleramic in Benicia, Ca. Of course it’s a big benefit they’re within an hour’s drive from the shop, but more convincing was the fact they are ‘Farrier friendly’ and reportedly supplied the epoxy for a bunch of the F25 Carbons built in Colorado. They were very helpful over the phone as we talked about options, and I feel I’m using very high quality material at a very reasonable price (well under any West System prices I could find). The ratio is 4:1, which also helps keep the cost down (less hardener needed than some other systems).

The resin and hardener mix easily and are giving a nice long (about an hour) pot-life which is great for the long, repetitive laminations on these early stages of the beams. It takes the fillers well, too, so the putty-making has been straightforward.  Made a second visit to them in February, buying 3 – five gallon buckets this time. While it would be more economical to buy a big barrel, the convenience and ‘progress payments’ of the five gallon size seems right for this. I’m guessing it will be 20-25 gallons total to build the four beams.

For the first beam, I dispensed using the plastic ‘ketsup plungers’ straight from the big bucket. That was a huge drag, as it was difficult to heat the five gallon bucket enough to get a decent flow, plus it being critical to count every stroke. Finally got smart, stopped building for a day, and got the old StickyStuff dispenser pumps going again (they had seized up with encrusted hardener). Messy, tiresome job, but wow, these guys are the new heroes of the workshop! 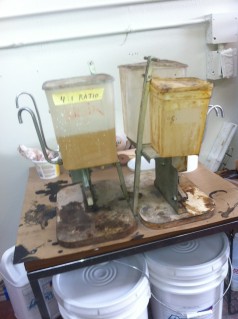 They look a little funky, but the tank-internals are now clean and the dispensing tubes have been replaced. The unit on the left is a 4:1 mix system, and the right is a 2:1. Now we can make as little as an ounce of mixed epoxy, or very quickly do big pints in quick succession as needed for hand-layup. http://www.michaelengineering.com/  Had to call these guys with a question the other day, and they were great.

Aft starboard beam-core came out of the mold the other day, and tonight the first lamination of the 4th beam got underway. Hopefully by next week you’ll see a photo of all four beams lined up on the table starting to get the complex inner web systems underway!