The forward port beam popped out of the mold much easier. It’s in the front of the photo, getting it’s core-outer wrap layer. On the first beam I wrapped the tape transversely, but it was difficult to get a perfectly flat lie on all surfaces. So we’re trying the second one down the length of the beam instead. The tape is DBM1708 45/45 angles, so I don’t think the orientation matters for strength. Running crosswise on the first one left lots of ridges to sand down. 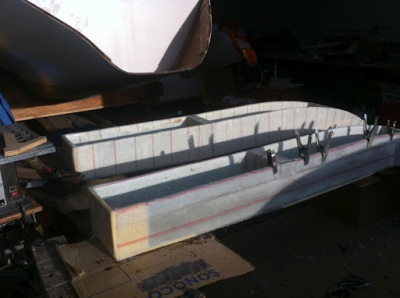 Now it’s on to the aft beams. Same mold frame, but these two will be a few inches shorter. See the endplate moved inboard a bit at the bottom of the photo. Tomorrow this one gets its bulkheads installed.