Payday. Sunday. The countless hours just got cashed in; Ravenswing stuck her nose out the Golden Gate today, got a breath of ocean air, and headed for the Pacific. 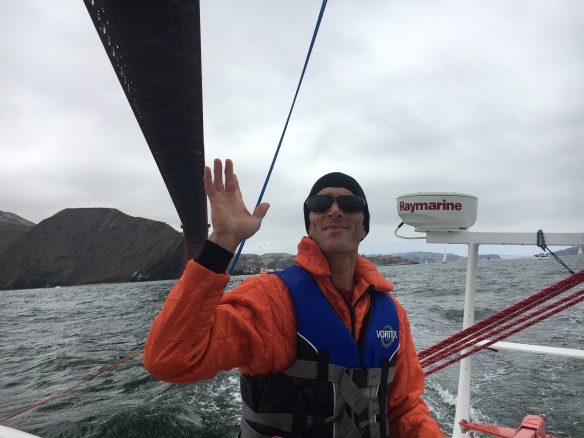 Jim is here from Oregon, getting some days really sailing the boat. We keep this guy bundled up ’cause he drives better warm and toasty. 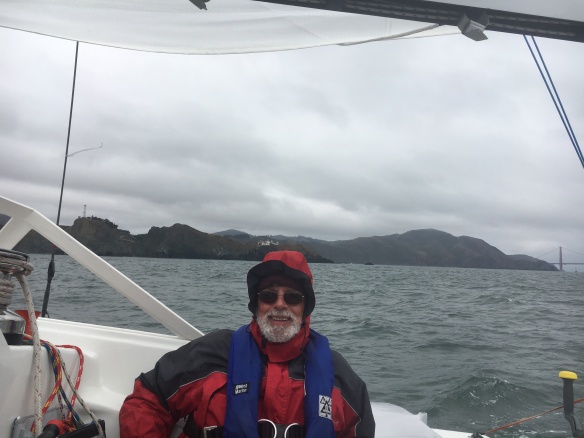 That’s the Point Bonita lighthouse over Jim’s head, meaning Ravenswing had exited San Francisco Bay and headed up the Pacific coast to Duxbury Reef (where we found many salmon fishing boats today). 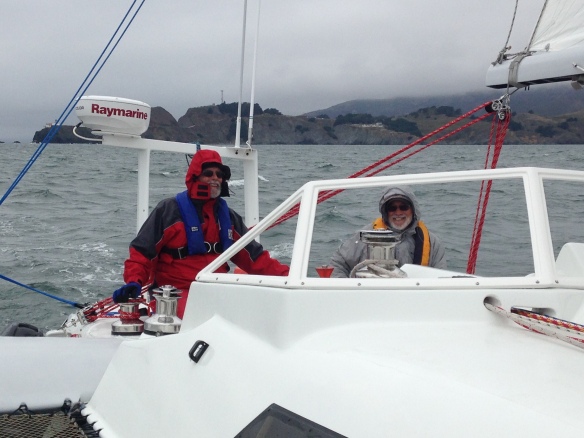 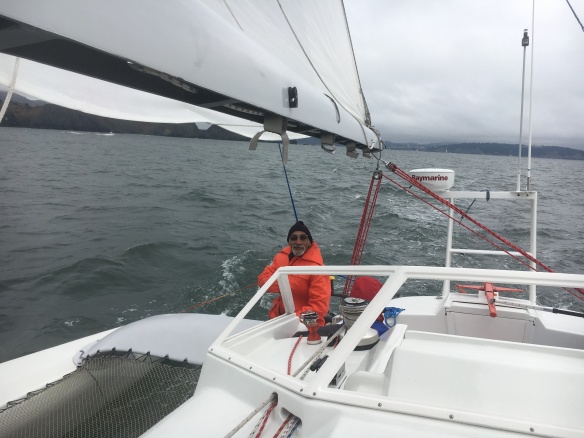 West Virginia Bob is all smiles being back on the Pacific after a many year hiatus. We are so proud of what Bob has accomplished with his Sewell Mountain Sailing program, introducing rural folks in the mountain east to sailing. Check out their GREAT work at http://www.smsawv.org

Before we left the dock in Richmond today, the windshield frame got installed. I didn’t want to miss out on sailing by actually installing the windows, so we were the nitwits with “windows so clean they look invisible”.  Thank you Charlie for the glamour shots! 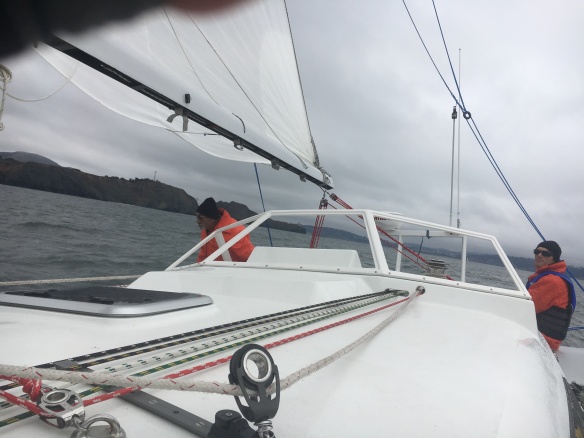 Here’s the Golden Gate Bridge from the ocean – we hope to give more of you out there a ride to see this vantage point. 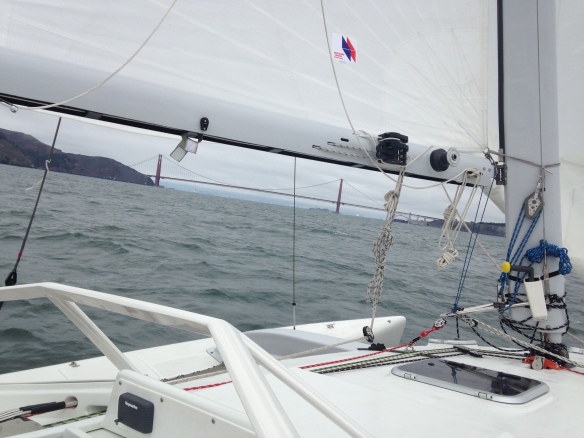 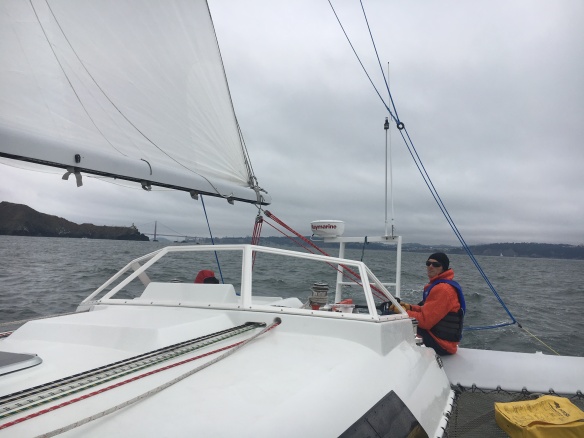 Yesterday we re-installed the steering gear with a better turntable bearing, 18″ chopped off the tiller for cockpit clearance, and most importantly Jim’s gift of a fantastic Forespar steering stick (tiller extension) – you can make it out as the white rod with black handle here: 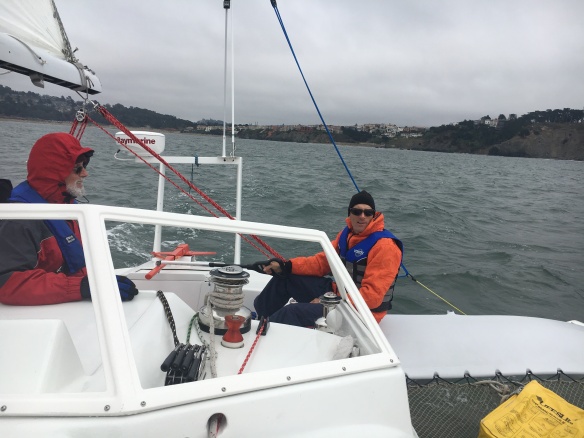 We’re going to caulk the windshield frame (removable) to the permanent base, and do that hopefully tomorrow before setting the acrylic windows. The access, particularly around the inside, is great before the windows go in. You can also see in these shots that the VHF antenna got mounted next to the anchor and steaming lights pole.

Yesterday gave Jim, Bob and Anton a taste of how the big Fboat can throw plenty of water at the crew just like her 24/25/27/31 foot sister designs. We went blast reaching in the central bay with reefed main and jib hitting 16 knots. Despite one attempt at canting the rudder more forward the helm is still too heavy, so throttling back seems like the wise way to play it right now. The shims needed inside the rudder cassette are a little more involved than we first hoped; it seems something didn’t translate right applying the F39 gudgeons / cassette angle plans to the 39′ stretched F36 hull, so experimentation is needed now to get the helm balance right.

The day wrapped up with a chance encounter with F31R Ma’s Rover by the SF Ferry Building, as owner Mark sailed home solo after dropping race crew in the city. Farrier’s website says an F36 should keep pace with an F31 in normal sailing, and go faster in rougher weather/seas (more mass?). But our reefed F36 with 5 cautious crew is no match for a Race2Alaska hardened skipper on his very fast 31R!  It was an interesting run back across the Alacatraz – to – Angel Islands slot where Ravenswing set a new ‘personal best’ at 16kts, with more in the tank and not feeling over pressed. Watching Mark’s boat accelerate when he wanted too has me eager to keep stretching this boat. 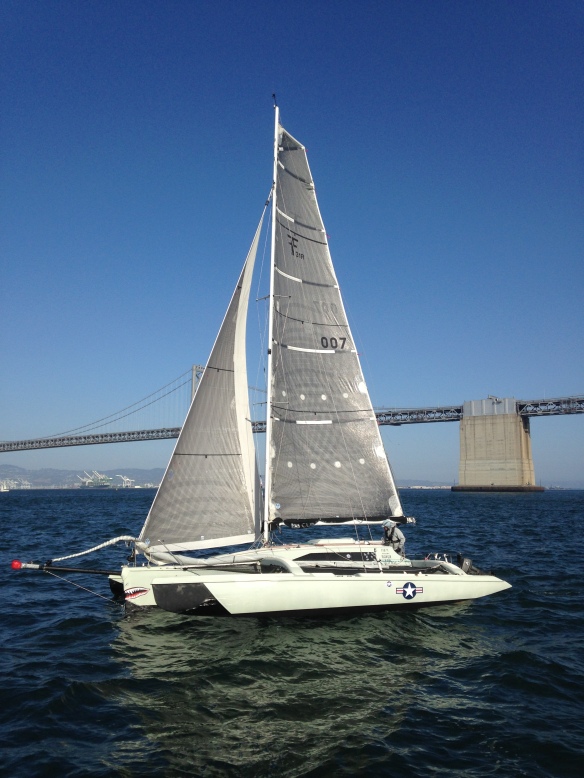