Thank you for not “unfollowing” during the three month hiatus of this site. We had to put the boat and sailing aside for the spring due to our housing issues, land-travel and business focus. The Carters have been juggling a lot of balls in the air. So it was very nice to get back on the water last week and we’ll get you some sailing shots in the next post. Today we’ll pick up the story where we left off in April. 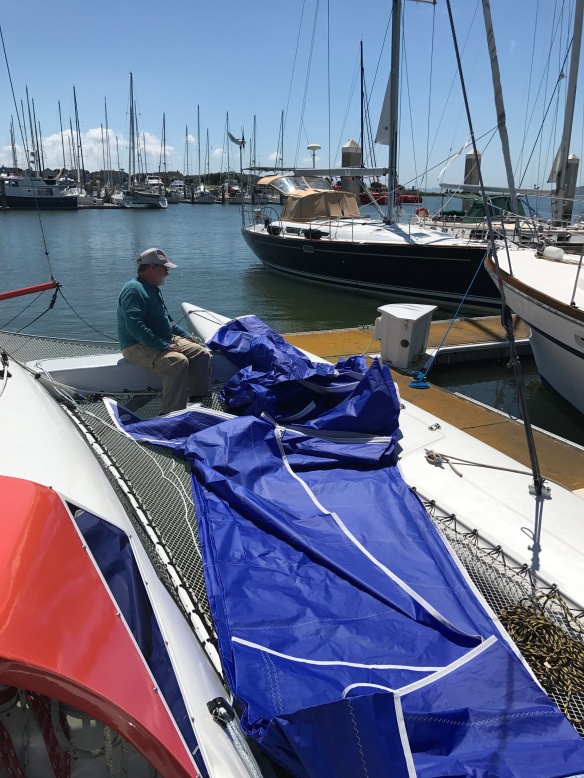 with the bowsprit installed (see it hinged over to starboard in the first photo) we hoisted the reacher on its Coligo furler for the first time. Everything checked out, but it was a struggle even at the dock in zero wind to get the furler attached and keep the sprit from collapsing into the water. We snugged everything up and took it sailing. The sail worked fantastically – this thing will be an easy to fly, high performance friend of the boat. (but the color turned out too close to Dodger blue!). After setting new ‘personal best’ boat speeds up near 20kts on flat water in the south bay, we went to furl and drop the sail on deck, but the pole fitting at the bow gave way again putting the furler under the boat at speed. Such a mess and I was convinced on the spot to re-think our bowsprit pole deployment orientation. We’re going with the tried-and-true style that served so well on the F27 – inboard pole end pivoting on the vertical axis. So we’ll put away the lovely aluminum cone for another boat some day, and it was back to the chop & table saws, grinder and drill press to fabricate some heavier aluminum tangs. 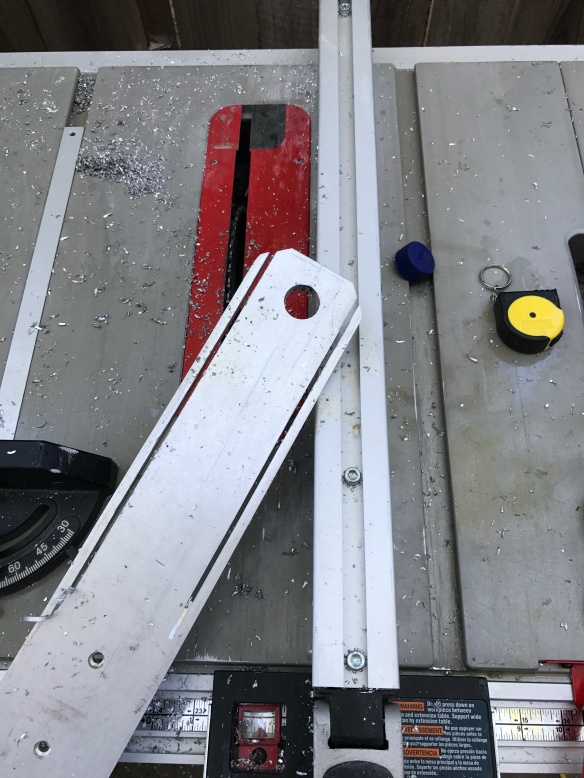 In the last photo, the piece with the empty hole thru a plastic bushing is waiting to get bolted to the existing tangs on the bow of the boat. All this isn’t ideal, as we’re now having to turn the whole works 90 degrees, but i think it’s strong and won’t look too bad. Now we have to shorten the whisker stays to fixed lengths (they were adjustable in the original configuration, and change the bobstay from fixed to a block & tackle purchase system. More splicing to do this weekend.

We also squeezed in some minor interior work. Jimbo will enjoy the new in-counter garbage can, made as light as possible with scrap fiberglass cloth. 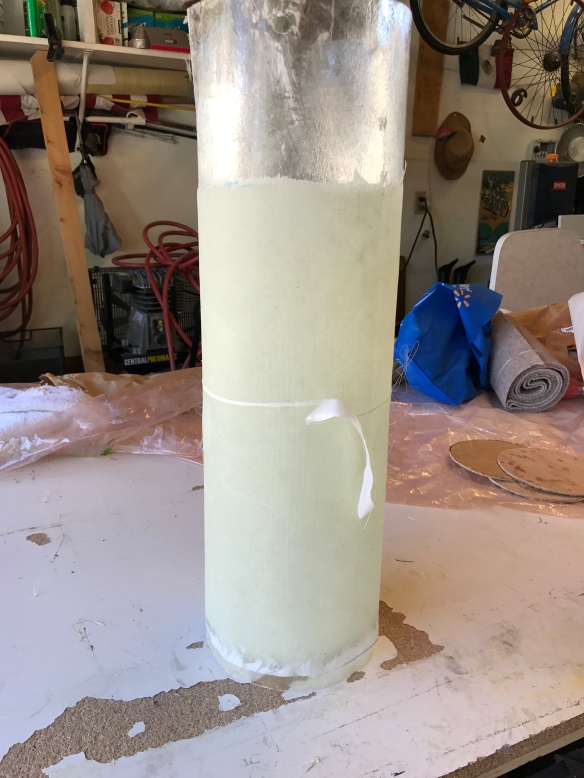 Joe and Vanessa found a clever way to ventilate under boat bunks – use rigid landscape matting that creates airflow channels. Plus it gives a slight bit of cush to the works. Love this stuff! (self-reminder to pay Joe our share) 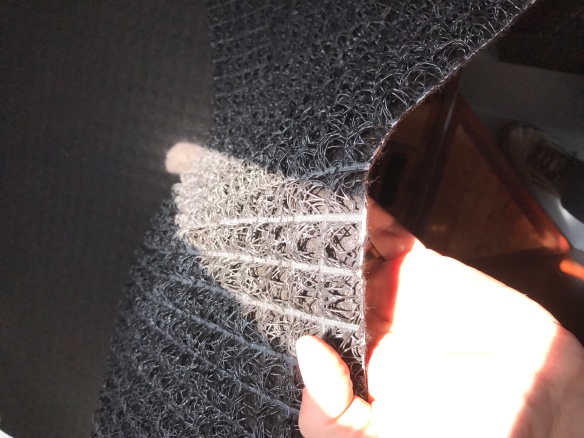 After this Jeanne and I went to the foam store and tested out various formulations, ultimately choosing a very nice six-inch tall piece that feels pretty darn close to a luxury home mattress. The foam store owner was surprised by the precision of our cutting pattern – most people just ballpark it. We explained the training of years with Farrier’s plans – no shortcuts! She got a laugh.

So the boat sat basically untouched in May and June while …

we flew to VA for Colin’s college graduation – he’s a nationally licensed Paramedic now – so proud :).  Then drove 2800 miles to Boulder for Griffin’s 21st birthday (yes we did some scotch / whiskey introduction that night).  Bought four new trailer tires for the tiny house unexpectedly in Cheyenne.

the boat-builder made two more trips to South Africa for business (but did squeeze in an animal park visit one weekend :) 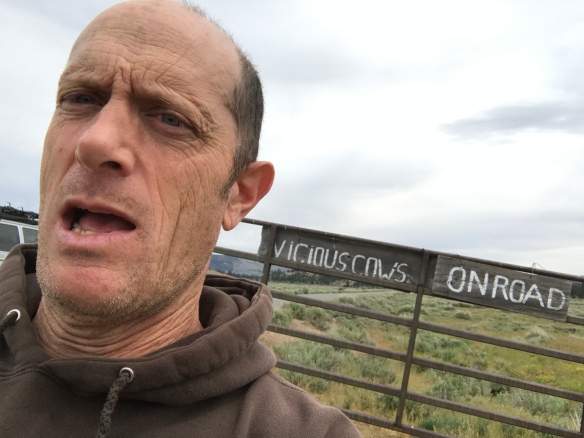 and headed back into the Sierra for board-member duties with our Trails Stewardship group in running the Lost & Found Gravel Grinder bike race, including perilous remote countryside stops for the sweep van driver.

But most importantly, June was our time to change homes. Our Santa Rosa house is still under repair, now targeting a mid-August finish, but not for our re-occupation. We’ll sell it asap because we’ve relocated to Novato, CA to a comfortable house on an acre with lots of fruit trees, gardening and north-bay views. There are two guest rooms for our sailing friends, plus the aft cabin on the boat 25 mins away, so just let us know when you’re coming to visit.

Taking a break from unpacking boxes, I snuck down to the boat only to find Ravenswing covered in bird poop, looking very sad. Two hours of hands-and-knees scrubbing brought back the shine, and she’s finally back sailing here in July.  Lots still to do before we head south in October (or possibly mid Sept) to be in San Diego for the start of the Baja HaHa at Halloween time… 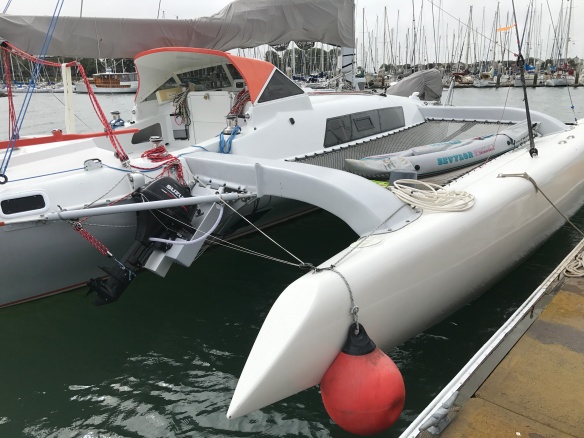