I left you guys hanging, I know. But who gets a nasty chest cold to start July? Dang, that thing hit me hard for a few days.

The Napa Marina team put Ravenswing back in the water on Friday, and Carlos joined me Sunday to cruise down river and back to Richmond. While underway I finished up plumbing the newly added cockpit 2nd drain while Carlos drove us through deep enough water. The Napa River shoals get a little tricky. We got in a nice wave with Pam, owner of a lovely Cross 42′ tri and co-owner of the bay’s Adventure Cats charters, as we motored by her place.

Backing up a step, yes we got the rotator arm and the jib back also on Friday.

There are now six bolts plus the strengthening cross hatching, vs the original two pivot point bolts. Works great so far.

It was pretty windy in Vallejo, which with the ebb current, means San Pablo Bay was set to be sloppy. So we set the main at first reef and charged down bay into the stiff southwest wind. We made 9-10kts going to weather, and with spray flying everything got a good two hour test. Carlos did a great job with sail trim, particularly as I was distracted keeping an eye and ear on recent repairs / upgrades performances. The escape hatch area was to leeward in the chop for three hours, and was bone dry inside.

We got to the central bay by 3 and while Carlos thought we should go blast around, I just wanted to put the boat away and was feeling crappy (the cold was setting in). But of course after this successful 40 mile trip, the engine died while making the final turn towards our dock. Thankfully we coasted into the wind and fended off / lassoed an empty dock, found the fuel hose problem, and got tied up where we belong. Damn, in just three years the gas tank – to – outboard hose was destroyed by ethanol in the fuel. Will replace all that tomorrow.

Today’s job was installing the replacement / upgraded toilet. The Lavac system is great; very simple and effective. But the older model had fragile porcelain tabs to hold the seat bolts. One of them got broken during the holding tank change job, and the glue job failed recently so we lost vacuum. So now Ravenswing has the modern Lavac, which looks sturdier in the key places.

Once we finally get moving south this fall, I am assured we’ll have plenty of jam for the peanut butter. Stone fruits are in high season here in the Carter-Corchero orchard :) 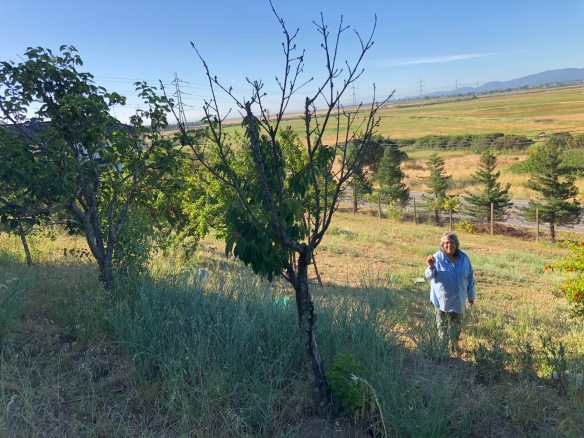 Hope your 4th was good. Bittersweet here though as we said goodbye yesterday morning to 40+ year family friend George Cunha. He liked to sail both on the bay and on remote vacations. He gave it a great 92 year run. Godspeed George!